The problem with Evangelicals, Pentecostals and Charismatics 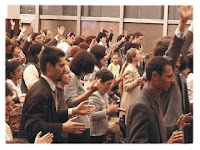 The problem with the brothers and sisters in the Evangelical, Pentecostal and Charismatics movement is not that they don't believe. They do.

In fact, they are sincere and they easily believe in the power of God to alter human and individual historical trajectories. I have been there and I know and have sympathies for their sincere and tender hearts.


The problem is not that they do not believe, the problem is that they BELIEVE EASILY so much so that they become fodder for false teachers who make merchandise of their faith.

False teaching and false teachers thrive in an environment where the spiritual guard of the Christian is not up but down. But we should separate the sheep from the wolves that devour them. Some of their preachers and teachers do not know themselves that they are already abusing Scripture. For sure they are subject always to spiritual seduction. Yet this state of affairs are not only present in this movement, it is also present in old time mainstream denominations and synods. This is not entirely exclusive to the evangelical, pentecostal, and charimatic Christians.

If we be honest not entirely what they practice are not with Scriptural support, like praying and laying hands on the sick, raising their hands in worship, having quiet time for devotions etc.  They are found in Scripture.

But there were false prophets also among the people, even as there shall be false teachers among you, who privily shall bring in damnable heresies, even denying the Lord that bought them, and bring upon themselves swift destruction. 2 And many shall follow their pernicious ways; by reason of whom the way of truth shall be evil spoken of.3 And through covetousness shall they with feigned words make merchandise of you: whose judgment now of a long time lingereth not, and their damnation slumbereth not

The teleevangelists do make use of them for monetary gains because of their gullibility.

However, though some doctrines are abused it does not mean they should not be use, but rather the corrective is to stay on the track of their proper use.

That is not exactly how it happened.

UPDATED May 28, 2020
CONTINUATION OF https://extranos.blogspot.com/2020/04/the-validity-of-lutheran-online.html


During communion, does your pastor go to each of you and distribute to you the bread and wine? I must say, this is a lovely gesture, comforting and very touching. Frankly, I like the way this is done. It is orderly and efficient.
However, that is not what happened during the Last Supper.
There is this notion going on that for the Sacrament of Communion to be valid, it must be done the same way as the Lord did it, if not, the Sacrament is not valid.
People of this belief (I would say, mistaken), believe that the distribution the way their pastor is doing it, must be observed or else the Communion Sacrament loses its significance and validity.
To show that it is not the way it happened in the Last Supper – the accounts of this is found in the Gospels of Matthew, Mark and Luke. The sequencing is slightly different with Luke 22: 14-23. The point is that these happened and the bread and wine got consumed,
Jesus Institutes the Lord’s Supper
14 When the hour had come, He sat down, and the [b]twelve apostles with Him. 15 Then He said to them, “With fervent desire I have desired to eat this Passover with you before I suffer; 16 for I say to you, I will no longer eat of it until it is fulfilled in the kingdom of God.”
17 Then He took the cup, and gave thanks, and said, “Take this and divide it among yourselves; 18 for I say to you, [c]I will not drink of the fruit of the vine until the kingdom of God comes.”
19 And He took bread, gave thanks and broke it, and gave it to them, saying, “This is My body which is given for you; do this in remembrance of Me.”
20 Likewise He also took the cup after supper, saying, “This cup is the new covenant in My blood, which is shed for you. 21 But behold, the hand of My betrayer is with Me on the table. 22 And truly the Son of Man goes as it has been determined, but woe to that man by whom He is betrayed!”
23 Then they began to question among themselves, which of them it was who would do this thing.
If we look at the order here, it is different from how it is done in the churches. For example, here, the distribution of the wine came first. You must be accustomed to the bread being the first to be distributed. However, this is not the case here.
Now to defend the notion that how so many of us have been doing it the way the bread first and then the wine second, people have appealed to master exegetes. One of which is R. H. Lenski. We will focus on v.17 & 20.
Here is what Lenski says of the above passage. Lenski explains that what Jesus was going through was part and parcel of the Jewish Passover sequence which is made of 10 phases. He makes it appear that there are several cups in this Passover. Truly, when Lenski describes what was happening in that passage you can almost see Lenski being there in that scene. For Lenski, there was an entirely different cup – he says “This was an entirely different cup (v.20), one that was passed after the Passover dining had been concluded”.
Now many exegetes think so too – that there were several cups, but and there is a big but – there are those equally in number who do not cozy up with Lenski. For one, Lenski imports too much extra Biblical information, meaning OUTSIDE the Bible to make his case.
For example, we do not have any information from Luke that this or that is the way they did the Passover. Also, if your knowledge of the Passover is post Temple destruction, then that Is Rabbinic and it is an anachronistic reading of Scripture. The safest method is to stick what Scripture says and not make any suspicious notions into Scripture.
Lenski is engaging in argument from silence. Let’s not be shocked, he was after all human too.
If at all, we can assume the same cup is what was used by Jesus in v 17 and v. 20. Why do I say this? It is because then N/KJV translates it as “Likewise, he took THE cup”, which cup, “THE cup” in v.17.
Indeed, other exegetes come on my side too. For example, Norval Geldenhuys – The New International Commentary on the New Testament – Luke. Alternatively, Walter Leifeld – The Expositor’s Bible Commentary – Luke – argues for multiple cups but comes out that the cup in v 17 and v 20 is the same cup, third cup of the Passover Both of these exegetes come down to this point – it is the consumption of the bread and wine – that was the point for the Supper. The sequencing is not the point, the consumption is!
At last Adam Clarke, conceded – the way we do communion in sequence is not necessarily the same as we do it today. Look it up yourself – it is in Volume III, Clarke’s Commentary.
Here is what he says...


"It does not appear that our Lord handed either the bread or the cup to each person; he gave it to him who was next to him, and by handling it from one to another, they shared it among themselves, ver. 17. IN THIS RESPECT THE PRESENT MODE OF ADMINISTERING THE LORD'S SUPPER IS NOT STRICTLY ACCORDING TO THE ORIGINAL INSTITUTION."


So the point of my article - is this - Anti-Lutheran Online Communion (LOC) people have no right to put down LOC people's communion saying theirs is invalid because that is not the way the Lord instituted the Supper, when in fact the Anti-LOC are also not administering the Sacrament the way it was instituted either! What is true for the gander is true for the goose. Jesus did not go around doing what Lutheran and other sacramental pastors are doing, handing the bread and wine to one after another.

Another take away here is this – if you insists that for communion to be valid it has to be the SAME way the Lord has done it – according to your opinion, then you miss the POINT of Holy Communion!
Posted by LPC at 1:43 AM No comments: