Quoting the BoC Fathers?...That's a no no!

A few weeks ago, Rev. Paul Rydecki wrote a fine essay entitled  The Forensic Appeal to the Throne of Grace in the Theology of the Lutheran Age of Orthodoxy: A Reflection on Atonement and Its Relationship to Justification

In this well written paper, Rydecki quoted Scripture and from the Concordian Fathers that Atonement and Justification are not one and the same thing. It should be admitted that they are related but that does not mean the two are one identical. Rydecki's paper is filled with the statements of the orthodox Lutheran fathers that showed that from their perspective, atonement and justification are not equivalent concepts where one can be used as a substitute for the other. The action of God in the Atonement is not a simultaneous action that God has Justified the whole world ALREADY right there and then.

Now we have been pointing this difference of concept to universal objective justification (UOJ) adherents for many years. Such a category mistake results in confusion, and lots of it. Let me name one right off the hat...

What would the famous UOJ promoter, the late C. F. W. Walther might say about the wisdom of quoting the BoC fathers, if he were alive today?

Normal people might consider what Rydecki did a reasonable procedure but Walther would have considered Rydecki a very naughty boy.

Here is what he said when he was being challenged in his doctrine of Election... 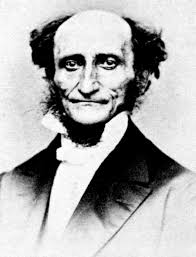 The principal means by which our opponents endeavor to support their doctrine, consists in continually quoting passages from the private writings of the fathers of our Church, published subsequent to the _Formula of Concord_. But whenever a controversy arises concerning the question, whether a doctrine is Lutheran, we must not ask: "What does this or that 'father' of the Lutheran Church teach in his private writings?" for he also may have fallen into error;

In a typical cultic fashion Walther dismissed the words of the BoC fathers assuming that they were wrong, ... because they disagreed with his innovative view.

In cult like fashion, ala Samuel Huber, Walther did not bother to argue what might the said father meant but rather he dismissed their words as something that should not be taken seriously, a none event. That shows you the attitude of Walther towards his critics. Huber did the same, he purported to know more than the Wittenberg Reformers even charging them of Calvinism, the ideology he claimed he eschewed.

When it comes to UOJ, even UOJ famous proponents admit that it could not be found in the BoC. All of the said portions where UOJ is said to appear in the BoC is what might be called pareidolia (Google it).  It is just like finding a rat amongst the rocks in mars or like seeing the Virgin Mary in a tortilla corn chip.