A whole lotta shakin goin on at PlanetShakers

If the number of young people attending a church is an indication of success then PlanetShakers City Church in Melbourne tops them all. Two my kids used to go to this church, until I gave them some subversive ideas.

This week has not been a good week for this Assemblies of God affiliated church. One of its former pastors, Pr. Mike Guglielmucci confessed that the cancer he claimed to have been suffering from was a fake, there was no terminal cancer after all, it has always been a hoax. The interesting thing is that this cancer story happens to be the inspiration for a hit Christian song entitled - The Healer. Moreover, the cancer story gave the church another story - the wonderful story of courage and victory in the midst of suffering. The story of battling on with life even when life dishes out pain and sorrow. We are hungry to see heroes because we want them for ourselves. We desire inspiration life sucks.

It would surely have been a marvelous story if it were true, but this week Pr. Mike came clean and confessed that he just made it up and play acted on that angle for the last couple of years. Indeed, he managed to fool his family and church.

For a similar hoax see The Forgotten Marjoe

Good on Pr. Mike for coming clean. We must rejoice when one who is wrong recognizes it and now wants to make it right. I hope those helping him still give him Jesus and not assume the Gospel.

Some of course are shocked and angry and I expect the anger to come from the members of his church. Some of course will use this as another bullet to fire at those loony Christians and even though I am not Pentecostal anymore, I am included still in that attack. Pagans don't discriminate between one Christian from another (in case you are naive to think they can distinguish, I recommend you get some counseling). Anger always comes to those who forget that Christians are sinners too. Pagans are quiet when they see Christians on top of the game but wait till these Christians fall, they become opportunistic and take the chance to insult Christ and his people.

What of course makes the case specially serious is because PlanetShakers present the Gospel as the answer to victorious living, it is the Christian life-style that is the good news rather than a once dead now living saviour who died and rose again for mere sinners to win the forgiveness of their sins. It preaches Christianity or the Christian, rather than the Christ, oh yes, just get Jesus and life will be rosy.

Christians are mere sinners. The sad thing is that in that movement the Christian is not simul iustus et pecator, simultaneously saint and sinner. So it is a shock to the system when the sinner aspect raises up its ugly head, and the brat does do that from time to time and sometimes it wins.
Posted by LPC at 12:04 PM 7 comments:

Proverbs 30
8Remove far from me falsehood and lying;
give me neither poverty nor riches;
feed me with the food that is(A) needful for me,
9lest I be(B) full and(C) deny you
and say,(D) "Who is the LORD?"
or lest I be poor and steal
(E) and profane the name of my God.

Thank you for your prayers, I arrived back safely at my home base.

As I moved in and out of Manila, I have noticed the increase of depressed areas in the midst of high rise apartment buildings, something I am not accustomed. You see when I left more than 20+ years ago you could stand in the middle of the street and look high and would see blue sky . Not anymore. You will either see the smog or a high rise will block your view.

Last time I was here was 1999, but something acute has changed. It used to be that Filipinos have what they called "bayanihan concept", meaning, they will gladly help you without expecting anything in return. It used to be that people would be insulted if you try to pay them for the service they are gladly giving to you. Hmm, not anymore, the reverse is happening, and in a more profound way. They still will help but they expect you to tip them.

I know poverty is the cause of the 'Filipino Diaspora'. This has reaped families apart, a husband or wife goes to the Middle East and leaves his/her partner behind to earn and send money back home, but this has also introduced complications, loneliness and countless sufferings.

Upto what extent does poverty make people do things they know they prefer not to do?

In many ways I can appreciate that people will do things to earn a living so as to survive, but I am also asking, to what extent is poverty used as an excuse to engage in risky, dangerous and even illegal activities?

The Lord does not remove the poor so he can give us a job to do - to care and help them.
Posted by LPC at 9:55 AM No comments: 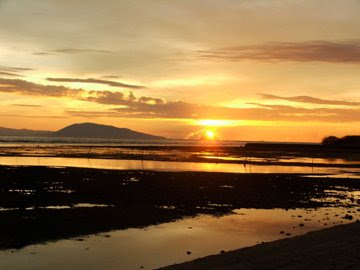 It just occurred to me again, it is hard to praise the Lord without the background of the Cross. You cannot do it.
Posted by LPC at 9:59 PM No comments:

On vacation, but think about this...

The picture says it all doesn't it? Be good, there will be no post for the next 2 weeks.

For our reflection I am featuring again Mykalos' brutally frank comments...

Talking about “CC (Closed Communion)” I would single out the main controversial issue.

Separation of so-called conservative synods is usually based on doctrines lying outside BoC. E.g.: a) on the question of salvation by faith alone we all, Protestants, are united; b) on the essence of Eucharist there is a virtual agreement not only among Lutherans but also among them and many Orthodox Christians. Moreover (and it’s a principal point!), in order to be Lutheran someone has not to sign the complete BoC (including FoC). It is sufficient for him to share the Augsburg Confession (AC) only. The BoC is a historical document for German synod in XVI c. (and, of course, for LCMS and WELS as for traditional German descendants in the US:-)). Even for Scandinavian
Lutherans in XVI c. and up-to-day the complete BoC wasn't a document of obligation. They were satisfied with AC and Luther's catechisms.

Probably I’d specify: I am for the "CC" but ... for all Lutherans. It might be "closed" for Christians of other denominations because we cannot be reasonably sure whether they confess salvation by faith alone (without any add conditions) and real presence of Christ in the
Sacrament. But among believers of AC ("traditional" or "liberal" in their hearts) there should be no barriers in communion with Christ.

Well, whether views on the status of deuterocanonical Scriptures or a place of women in church public ministry are really determinative for a “communion gap”? These stuffs are not in BoC at all but they are present in “constitutions” and “confessional statements” of some synods. In this case is the Communion a tool of manipulation or a mean of grace?

I covet your prayers for a safe trip. My love to all of you. Peace be with youse alls.
Posted by LPC at 7:47 PM 8 comments:

I coined this word. I am still trying to define what I mean by that term. I have not found words to exactly describe it. As a starter, my idea is being Gospel centered in the sense of majoring on the major -- the Gospel, or Gospel natured-ness, or evangelical-ness. The concept is still being sorted out in my mind.

Here are the following quotes that might give a gist of what I am getting at . This is from Pr. Acroamaticus who is sadly hanging his blogging cloves

I believe that if we are still an Evangelical church (and I use that term in the same sense as Sasse did, to describe a church that draws its very life-breath from the Gospel of Christ crucified for the forgiveness of sins, and seeks to proclaim only that Gospel to the world), then we will view WYD and the RC church with a deep ambivalence.

This one is from Bro. Mykola from Ukraine commenting on one of my posts here.

CC[closed communion] had become an invincible barrier even between so called conservative church bodies. It is not a secret that even the CELC and the ILC have not communion of altar. That's why primarily noble CC sometimes transfers into 'near sectarian' tool for emphasis of someone's identity.
So I can't decide definitely if CC practice is undoubtedly evangelical.

BTW, my blogging will be less in the next couple of weeks when I hope to be in Manila. If you have an article you want me to consider posting, please email me.

God give you peace.