The Validity of Lutheran Online Communion 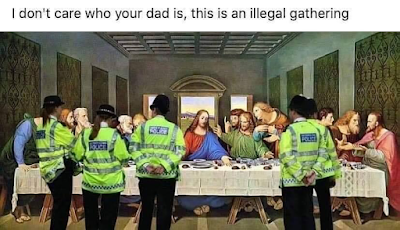 This corona-virus crisis is opening up many cans of worms, not only economic issues but religious as well. It looks like Lutherans will be deprived of Holy Communion for as long as social distancing is required. To me, a fortnight without communion is a disastrous situation already.  Yet it seems some ministers with a point of view are willing for their flock to starve of this part of the means of grace which God has given to the Church as a gift, for nourishment. Some even argue that this is a forced fast for God’s people – forced fast! Worth repeating, God does not want you to have communion, that is your fast? If you are not shocked by this, forgive me for being more sensitive than you. If there is someone who does not like you to avail of the means of grace, it is the devil, I’d say.

So I go now to this issue of Online Communion.  Is it valid?

If you confront a thinking Lutherans and ask them if they believe the Word is efficacious, of course, you will not catch them denying that the Word of God is effective. The self-same Christian would likely have listened to a sermon in their podcast or even on YouTube. They, no one would doubt, believe anyone could get save through such a broadcast, but …

There is one thing to affirm in theory the efficacy of the Word, but it is astounding if it is also hypocritically denied in practice.

Let me give a scenario. You attend A Skype or Zoom service broadcast. You put the bread and wine close to your device and the minister when it is time now for the Lord’s Supper, the minister reads out the Words of Institution for consecration ,you then partake of bread/body, wine/blood of Christ. Let is add further that before he consecrates, he gives a warning of not eating the bread and wine unworthily.

Many so-called Lutherans who claim orthodoxy say this is off.  As if the old orthodox Lutherans anticipated the issues presented by the Internet!

Lutherans who oppose Online Communion present a couple of BoC passages to assail the validity of an Online Communion performed by other Lutheran pastors.
https://logia.org/logia-online/the-impossibility-of-online-administration-of-the-lords-supper2020
Before diving to respond to this post, I must commend Pless's for not importing any other personality's arguments into the discussion. I guess he well knows that we are not obliged to subscribe to people's opinions because to a Lutheran only Scripture counts and guided exposition form the BoC, the Confessions. That is all.

I will group them into two:

I will deal with them one by one but be warned about me, I do not consider the BoC at par with Scripture, I only have OT and the NT as authoritative source, so the BoC is not another Talmudic document for me.

To find out if the quotes from the BoC are sound to throw down online communion by Lutheran, we need to do exegesis of the BoC text the anti-onliners present.

Note: The BoC was written in a certain context. Here they are,  so please get a copy of your BoC and read the references for yourself. I am using Tappert’s translation.

a.)     SD  VII, 75,79, 85-88. Here also we will focus on the word “distribution” because the anti-onliners say this is not what is happening in Lutheran online communion. Let us see how this idea is mentioned there.

1.       SD VII, 75,79 Context: The Sacramentarians – you see this word mentioned. Who are they? These were Lutherans who deny Romanist transubstantiation and the Lutheran sacramental union, so Calvinistic in other words. This text asserts that as bread and wine are presented, and are being distributed and are being consumed the body and blood of the Lord is there. Let me ask the question, do Calvinist distribute the elements?  They do. It asserts the Word of Institution is efficacious and remains effective at the presentation, distribution, and consumption. It states “Christ himself is still active through the spoken words by virtue of the first institution, which he wants to be repeated”. When did his first institution happen? 2000 years ago at the Upper Room! A recording?  Sounds like it even is. The online communion Lutheran ministers do repeat the Words of Institution and the argument using this BoC passage is red herring, Further, there is no mention of a legalistic manner the elements are to be handled.
2.       SD VII, 85-88: Context: The Romanist practice of the mass. Note it is deflecting the idolatrous misuses and perversion of the Supper. Here it mentions the “actions”: the consecration or words of institution, the distribution, and reception [of the elements]. Now here “distribution” is used, what did this mean? It is even explained! Further on in 87, it explains the Papistic abuse of NOT DISTRIBUTING the entire elements of bread and wine. Let’s read it “Apart from this use it is not to be deemed a sacrament, as when the papistic Mass the bread is not distributed (ie not given to communicants) but is offered up, or locked up, or carried about etc.” As a former RC kid I know this – it is called Eucharistic Adoration.

Let’s pause. Are not the complete bread and wine available for the communicant in an online communion? They are!  Do the communicants worship the elements after consecration? No. Thus they are distributed in their above context. Again these BoC passages do not hit the target against Lutheran Online Communion. Further, there is no legalistic manner how this is to occur, that is not the point as well. For example, it does not say here that the pastor has to physically shove the bread to the communicant’s mouth. Or is there a rule that once the wafer or bread is in the mouth, it is not to touch the communicant’s palate.

c.)     SmallCald Articles  II, II 8-9: Context: Romanists Mass: As a RC kid, I knew very well that the priest practiced private mass for themselves. But the Lutheran Online Communion is not a mass. That is the first point. In fact, some Lutheran ministers do not raise the host to avoid the conception it is a sacrifice offered to God. Secondly, the communicant is not alone. For in a broadcasted communion, with the elements present in the locality of the communicant all consume at the same time – they are separated by space, but not in time – they are not alone. To say they are is being dishonest and they do not know what they criticize.
a
As for the possibility that the communicant may unworthily discern the body and blood of Christ, the Online Pastor can preface before the Word of Institution some warning words to that effect. So that issue can also be mitigated.

It has to be some sleight of hand to tell the believers that the orthodox Lutherans prescribed a legalistic manner of administrating and consuming the Supper elements. It is also a misconception to think that one has to re-create to the letter every element of the Maundy Thursday Upper Room scenario to make the Supper valid. Moreover, this stems from following some human tradition or interpretation which we know is another idol. Jeremiah 17:5.

In the end, it boils down to believing if the Word is efficacious even over the Internet or not.

This coronavirus has already deprived many of life and livelihood. It has already given people suffering, the believer should not be given unnecessary further deprivation of a vital element given by the Lord to his disciples for the furthering of their faith – the Supper.

Well thought out, Doc. I appreciate your article and, even though I would not prefer to celebrate LOC, I would not be so presumptuous to condemn the practice and mess with the faith of good Christian people who partake the Body and Blood of our Lord using this medium.

So much for closed communion...

The table of the Lord is the Lord's table as one said to me, it is not you or your pastor's table. Closed communion was practiced by Christians for CHRISTIANS. So it should be allowed if a Christian comes to the meeting from another group that can affirm that on that table, it is the body and blood of Christ for the forgiveness of sins, then what is the problem.

Those Synods who say they practice closed communion are fake, I have been to their churches and fortunately their pastors are inconsistent with their Synodical stance and yes, they do - let me take their communion, as I would give them as well.

This idea that in order to take communion you must be 100% lock in the doctrine of the Synod - is Waltherian invention.