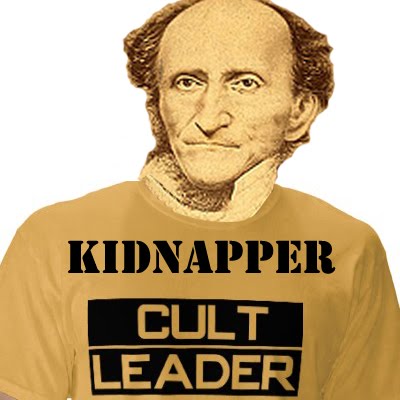 Over at Shaky Lutherans,  we see a celebration of ACLC's critical response to ELDONA's statement on Justification.  ELDONA, thank God, retreated away from  the doctrine of Universal Objective Justification (UOJ), the doctrine that says that God has ALREADY declared the world to be righteous, when Jesus was raised from the dead (or when he breathed his last at the Cross - UOJers are not uniform on this). Obviously such a move by a synod away from UOJ carries some traction and must be averted at all cost - it is just bad publicity, so all guns from UOJ synods are pointed at ELDONA today.

Needless to say the UOJers proudly fronted their hero, C.F. W. Walther by presenting him as the man with the final say. Here is an interesting quote...from Francis Pieper presented by Mr. Jim Pierce (an enthusiastic defender of UOJ).

Should, for instance, anyone deny the universality of Christ’s redemption, negating with Calvin the Scripture truth that Christ has redeemed all mankind and that in the Gospel God seriously offers to all men His grace without any discrimination, then he subverts the doctrine of justification. If that error is maintained, then the individual sinner cannot become personally sure of his salvation unless he receives an extraordinary, immediate revelation to that effect. Again, should anyone teach that Christ has indeed redeemed all men, but not completely, in other words, that Christ has indeed made forgiveness of sins possible for all men, but that this forgiveness of sins or justification does not yet actually exist for every sinner, then he makes faith and conversion a meritorious cause of the forgiveness of sins and invalidates the doctrine of justification by grace for Christ’s sake. Or, should anyone pervert the doctrine of the means of grace by denying that God offers the sinner His grace in Word and Sacrament so that the sinner must seek grace in Word and Sacrament, then he bids the sinner seek grace in his own subjective condition, in conversion and regeneration, and so in his own good works. Finally, should anyone pervert the doctrine of faith by denying that faith is essentially trust in the grace offered in the Gospel and by identifying faith with the feeling of grace, then he will put in place of divine grace the condition of the human heart as the basis of justification and salvation. Or should anyone teach wrongly concerning faith by ascribing the creation of faith to human co-operation or to man’s good conduct, then again he surrenders the Scriptural doctrine of justification despite the fact that he may use the expressions “by faith alone” or “by grace for Christ’s sake.” This subject seems to us so very important that we shall develop more fully the three points on the basis of many statements made by Walther.


I highlighted the bolded text to show how UOJers commit the fallacy of tertium non datur. The reasoning goes like this, if you do not believe in UOJ then you MUST...believe in "faith as a work" or you MUST then believe in Limited Atonement... blah blah blah. None of this is true because the statement assumes that there are only two options that are mutually exclusive. This is the fallacy, it assumes there is no third alternative. Anti-UOJers do not believe in Limited Atonement and they follow the teaching that faith is a gift created by means of grace. At first blush the fallacy makes initial sense but this is demolished by a clear exposition of passages which purports to teach a Justification without and prior to faith.

A few months ago, I was search through the Internet and I found the thesis of a certain Rev. KARL EDWIN KUENZEL. This ThD thesis (2006) was about the doctrine of church and ministry in the ELS (of USA).  Of course, the thesis could not help but mention Walther because after all Walther wrote something about this subject. The author had some glaring criticism of Walther though we can also detect somehow his political stance of not overtly lambasting Walther. he swung between respect and disdain of Walther. Here are some interesting quotes. Some of the emphasis are mine...

Walther was a tremendous leader, a dynamic preacher, a powerful lecturer, and a remarkable
writer. However, lest we wind up worshipping the man, as many had done with Martin Stephan,
and perhaps some do with Luther, we need to be mindful of some of Walther’s deficiencies.
Walther was legalistic when it came to the matters of usury, dancing and going to the theater, life
insurance, running a tavern, in-law marriage (e.g., a man marrying the sister of his deceased wife),
geographical parish boundaries, the local congregation and the pastoral office. He often made his
position as if it were Scripturally based and therefore God-given doctrine, when, in fact, he was
going beyond what the Bible says and turning matters of casuistry into untenable doctrines.

Not only did Walther use terms that were readily misunderstood by others, but another cause for
his naevi [faults], according to his student August Pieper, was that Walther depended too heavily
on the secondary sources of theology, i.e., Luther and the lesser fathers. In spite of all his
emphasis on Scripture, there can be no denying this. Although Walther was a great, and a very
talented leader, he was a poor, even an inferior exegete. He had only an average knowledge of
the original biblical languages. Frequently he would cite dozens of Bible passages merely because
Luther and the dogmaticians had done so. Yet these passages did not prove what they were
supposed to prove. Although very eager to express himself on matters, he failed to recognize that
his position was based on translations and not on the original text. Thus, he could say something
as if it were doctrinally true, but without a firm scriptural basis. Over all, the knowledge of Scripture
that Walther had was more an intimate acquaintance with Luther’s Bible and knowledge of certain
passages rather than knowledge of the whole line of thought of a biblical book and of the original
text.

Another reason that is frequently cited for his use of this format is that he
realized how inadequate his knowledge of Scripture and doctrine really [LPC: I suppose compared to Hoenecke]was in comparison with
Luther and Chemnitz, Gerhard and Calov, thus in all modesty he was afraid of going astray in
even the smallest point of doctrine.

Walther was a great leader and the Lutheran Church benefited much from his leadership, still no
matter how justified Walther’s method of citing Luther and the Lutheran dogmaticians might have
been in the beginning, it was wrong both in principle and in practice. The problem was that unlike
Luther, who stressed the Bible and the study of the Bible, Walther’s positions neither rested
directly on Scripture nor did they lead one directly into it. Instead he strongly stressed, to the
extreme, the importance of Luther and the Lutheran Confessions and the Lutheran fathers, and
certainly much more than he cited God’s Word. Utilizing this format Walther led people to think that
the matter under discussion or being presented had been established sufficiently by the quotations
from Luther and the fathers; therefore it was unnecessary to study Scripture. This format actually
hampered people in their use and study of the Bible. And eventually, it has come to the point
where the citation theologians not only quote Luther and the old fathers but now they have also
included Walther and others as proof of the doctrinal stand. As pastors, theologians, and
theological students took up the study of doctrinal maters in subsequent years the subject of study
was not as much a study of the Bible as it was a study of old synodical reports and conference and
convention essays. And now quotations from these, not the Bible, are frequently used to support
doctrinal positions

However, it was unsettling to have Walther take a firm stance on a matter citing the Lutheran fathers as his proof, yet not realizing that at the same time his position was in contradiction to what they had written

----
LPC: Is it any wonder why UOJ has damned souls and caused confusion? It was promoted by someone who knew more secondary sources rather than the Scripture itself, what do we expect?