One of the most difficult thing for me to understand is the idea that Baptism is something that God does rather than something that we do. When I was an RC kid, I never been reminded of my baptism, perhaps I was just ignorant but maybe the RCC really do, but not by my impression. In fact I asked my RC friend and he told me the same. That is something in the past. Then when I became a pentecostal, that was the same too, it is put away in the shelve and never recalled, but that is not true in the Lutheran understanding of baptism. Each start of the service, you start it off by recalling it - In the name of the Father, the Son and the Holy Spirit.

Then I kept on going back to the Gospel and the doctrine of justification and once we see that justification is a gift, then it is no longer hard to see that Baptism and the Lord's Supper is not a thing we do but gifts that God gives which are connected to the gift of forgiveness of sins in Christ, at the Cross. It is the same Gospel of 2000 years ago. The Baptist certainly would find this weird. I know I did. It sounds weird because they look at Baptism as an ordinance, a command, rather than a gift. No point discussing the mode, or candidates for baptism, you gotta discuss first the nature of the Gospel ie justification. Now that is also weird - to some.

No wonder it was difficult for me to get it because somewhere in my growth, I was made to focus on the Gospel as a demand rather than a declaration. So I go to church to receive God's gifts, what a nice deal.
Posted by LPC at 2:29 AM 16 comments:

The Continuing Saga of the White-Caner Baptist Calvinist Debate

There has been an ongoing online debate between Baptists Dr. Ergun Caner Dr. Ergun Caner, President of Liberty Theological Seminary and Calvinist Baptist apologist Dr. James White of Alpha and Omega Ministries. Originally the two were about to do a face-to-face to debate Calvinism in Baptist movement, but something went through in the process such that the debate was cancelled. It is funny that after the cancellation, the two for a while debated online the reason for the cancellation of the debate! But lately Dr. White has been commenting on the sermons of Dr. Caner, an example can be found here.

As can be gathered, the staunch Calvinist is White and the anti-Calvinist is Caner. I am not sure if Dr. Caner would like to be labelled Arminian, but he is a Of "free-willer" at least that can be said.

The comments that Dr. White has been making is quite revealing as well as the sermon delivered by Dr. Caner too. What is revealed in these two is the fact again that the Cross or Justification is not at the center of these two people's positions. Dr. White says that Jesus should be Lord because He created people. That is true that Christ created us but that is not the reason he should be Lord. Dr. White does not want to go to the Cross because to do that would mean he has to deny the doctrine of Limited Atonement. That would be bad because he will lose the "reformed" label. The "Reformed" label is something people fight for - it is the IN word in Christian circles now a days. On the other hand, Dr. Caner emphasized the free-willing nature of human beings such that it makes man the determiner of his salvation. In other words, Dr. White's Calvinism means that it is God who determines who is lost and who is saved. For Dr. Caner, it is man who determines if he is saved or lost. None of these positions talk about the Cross.

It is disappointing for example that Dr. White wants us to hail Jesus is Lord because He created us, and not because He died for us. On the other hand, for Dr. Caner, man casts the deciding choice, all has been done, all we need to do is make the right choice, make Jesus Lord.

The Church That Would Not Simply DIE 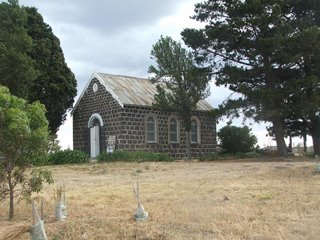 The church on a hill. Known to be the oldest Lutheran church operating in Australia, it celebrated its 150th year in operation last Sunday November 12, 2006. Built by early German and Wendish farming settlers in Victoria in 1856, it can only seat 32 people. It has no toilet, it has no electricity, it has no airconditioning, it has no kitchen, no dining area, no Sunday School facilities, and today it is the home church of only 8 adults and a dog!

What on earth is the point of this? It is certainly by today's standards foolishness to continue operating this church. In fact, it is good for the museums! It has only one use, you might say -- that of a historic tourist spot - perhaps it may earn its denomination some money in the process.

Thomastown Lutheran Church defies our modern way of thinking. It defies our pragmatism and our idea of church. People might say, well why go on? You might wonder though that of the 8 some people that worship there only one can trace her roots to the early founding settlers, all the rest may be considered new comers!

The church on the hill just would not simply roll over and die, it embarasses the modern mind and is offensive to our upward mobile thinking. So one wondes why is it still kicking and ticking, when in fact nothing is happening there? How could God be in any thing so ancient and small? Ahh but perhaps something is happening. Why is it still operating today? It is there because as one of its former pastors' say : it is there and still exists today because God wants it so.

"'Look, you scoffers,be astounded and perish;
for I am doing a work in your days, a work that you will not believe, even if one tells it to you.'"

I have been reading Harold .O.J. Brown's book entitled Heresies. I picked it up again primarily because I thought I had none (errors or heresies) but in the last year or so, I must confess, I was a party (a heretic in Brown's definition - heresy is a party) to some erroneous teachings - I did decisional-ism, born-again-ism, altar calling-ism, I did not see from Scripture the Law/Gospel, and although I think I got the Gospel right, I was wrong in turning its proclamation to a proposal. Although I was taught these ism from the ones who pastored me, I am responsible for repeating them . To all the folk I preached to, please forgive me. I am deeply sorry - above all I was wrong etc. etc. How I wish I could preach again the Good News that is better than you think.

Prof Brown, a confessing Reformed theologian, gives a fair treatmeant of all concerned be it orthodox Calvinist, orthodox Lutheran, and heretic ones of all types. There are a few things he admitted that interest me, one of which is when he says that the first couple of hundred years after the Reformation, the Calvinists produced more heresies than the Lutherans.

The first phase of the Reformation took the universal church out of the center of attention and replaced it with the local congregation; this [Pietism] second wave of Reformation, if we may call it that, redirected attention from the congregation to the individual believer. Christians began to sing "I" rather than "we"

I though this was interesting yet it still goes on today.
Posted by LPC at 5:11 PM No comments: