What is the favorite Scripture they use to promote this?

It is Romans 4:25. They believe right here in this verse, St. Paul is teaching a justification that occurred without any reference to faith

Here is an example.

In wrapping up my answer, we can talk about the entire human race, or the world, being justified—just as the Scriptures do (Ro 4:25)—as the action God took in response to Jesus’ resurrection from the dead where the Law is concerned

2.) From my interaction with one adherent of UOJ:

ME: "Joe it is different because Brett and I do not believe in the starting point that there is justification that has happened FOR all men without faith or without regard to faith. That is difference. The difference is that we do not posit or assert a universal justification."
Joe: You are speaking against Romans 4:25.


3.) Again from a post just recently by a Steadfast Waltherian blogger found here. To prove the existence of an objective justification that occurred outside of faith, the blogging pastor says this (apparently taken from Francis Pieper):


It is evident just from the sampling on how Romans 4:25 is being used that without a doubt, UOJers in general and the Steadfast Waltherians in particular believe in a justification that occurred without reference to faith.

What does Aegidius Hunnius say?


Hunnius :
Thesis 6
Hence Paul, when he expressly discusses justification in Romans 3 and 4, does not know of a justification apart from faith, and especially as Galatians 2 plainly says, "Man is not justified except by faith in Jesus Christ."


Did you read that? According to Hunnius, in Romans 3 and 4, St. Paul DOES NOT KNOW OF A JUSTIFICATION APART FROM FAITH.

Since UOJers are quoting Romans 4:25 to prove this, and obviously verse 25 is part of Romans 4,  these people I quoted above KNOW of a justification without faith.  Here Hunnius, a well known old orthodox Lutheran assails them or they boldly contradict him.

This is where American Synodic Lutherans are peculiar to the rest of the Protestant world.  It is only they who take Romans 4:25 that way. They are also peculiar amongst the rest of the Lutheran world! According to Bruce Church if we count the Lutherans who believe this stuff, there are only 2.5 Million of them who teach this stuff, out of some 45 Million (or so) Lutherans in the world.

The Hunnius quote I provided proves that the Steadfast Waltherians are Huberites or at least shares the conviction of Huber on this point...and that is not a good thing. If I were you I won't get involve with that. False teaching is a dangerous thing and we ought to be fearful of it. I know I am.

Steadfast Huberites and their upside down Justification

This post is dedicated in honor of those Lutheran ministers who are today suffering for opposing the Huberian false doctrine of Universal Objective Justification.

Many visitors of this blog are now sick of me posting against the Huberism of UOJers but I speak for one reason – UOJ is not Biblical and it is an improper way of speaking about the central doctrine of the Christian Church. The BoC speaks a lot about speaking. In the BoC one will encounter the phrase “properly speaking” many times. As for me, I speak against UOJ because it is an old heresy from Samuel Huber. It is a false way of speaking about what God does and has done in relation to how a sinner is made right with God. I got no other agenda and I hold no animus to those I disagree with.

A few months ago, the Steadfast Waltherians ran a post by Jim Pierce on their Doctrine of Justification. I say “their doctrine” because I do not believe it is the Biblical doctrine of justification that they hold. The article in question is found here.

I won’t go into the fine details but the reader should notice therein how Biblical concepts have been taken in isolation taking their cues from a denominational work called the LCMS Christian Cyclopaedia.  I liken this behavior to the Jehovah’s Witnesses expositing Biblical teachings using their New World Translation Bible.

I will cut to the chase and go down to the bottom summary of the post, where we read:

In wrapping up my answer, we can talk about the entire human race, or the world, being justified—just as the Scriptures do (Ro 4:25)—as the action God took in response to Jesus’ resurrection from the dead where the Law is concerned, as the following explains. The Law condemns the whole world (saint and sinner alike) and, because of Christ and what He did, the Law now has no hold on the whole world, since God receives the sacrifice of His Son which atones for each and every sin and thereby the requirements of the Law are fully satisfied by Christ. When we talk about the sins of the world being absolved, or forgiven, we are talking about a reality that holds for the world in Christ. That reality is excellent news for everyone, since it means we are not justified by our own works of the Law, but by God’s grace alone, through faith alone in Christ Jesus. Indeed, Christ’s righteousness is imputed to us and received by faith alone; thereby we are justified by what we Lutherans like to describe as the “alien righteousness of Christ” which is outside us, or not our own.

I got so many things to say but I will home in on the statements I have highlighted above. These statements are contrary to the Holy Scripture.

Firstly when Mr. Pierce said, “the Law now has no hold on the whole world”, what are we to make of this antinomian thesis? It is a perversion of the Law and bulldozers no less than two Biblical texts that come to mind…

a.)   Romans 6:14 says 14 For sin shall not have dominion over you: for ye are not under the law, but under grace. Who are those not under the Law? It is not the whole world. The “you” in the verse does not refer to generic human beings; rather it refers to “you, the (Roman) Christians who believe in Christ”. They are the ones who are not under the Law since they have become believers in Christ so they are now under God’s grace.
b.)    The other passage is Romans 8:1 There is therefore now no condemnation to them which are in Christ Jesus, who walk not after the flesh, but after the Spirit.
What the post suggests is that since Jesus Christ died for the whole world, that means the world is no longer under the Law and thus not under condemnation. This is not true, why would God send people to perdition? This idea runs contrary to John 3: 36 He that believeth on the Son hath everlasting life: and he that believeth not the Son shall not see life; but the wrath of God abideth on him.

Let me resurrect A. Hunnius against Pierce …
Thesis 7
Outside of faith in Christ and without it, man remains in condemnation, according to John 3, "Whoever does not believe has been judged already." And again, "Whoever does not believe in the Son will not see life, but the wrath of God remains upon him." And Mark 16, "Whoever does not believe will be condemned." If such a one has already been judged, if the wrath of God remains upon him, if he will be condemned, then in what beautiful way has he been justified? In what splendid manner have his sins been remitted unto him? Indeed, where sins have truly been remitted, there all wrath and condemnation are gone(Rom. 8). "Blessed are they whose sins have been remitted" (Psalm 32). Now then, are all men blessed? Even unbelievers? (Muslims?), Reprobate Jews?

So now we come to the second part, Pierce continued saying… Indeed, Christ’s righteousness is imputed to us and received by faith alone.

Let us see what the Scripture says here, recall Romans 4: 21 And being fully persuaded that, what he had promised, he was able also to perform. 22 And therefore it was imputed to him for righteousness. 23 Now it was not written for his sake alone, that it was imputed to him; 24 But for us also, to whom it shall be imputed, if we believe on him that raised up Jesus our Lord from the dead; 25 Who was delivered for our offences, and was raised again for our justification
Thinking and Bible literate Christians will not deny that the imputation of righteousness on Abraham happened not before he believed but at the point of his believing. In fact even old orthodox Lutherans would oppose Pierce’s understanding. An example of this is Quenstedt (credits:Ichabod) 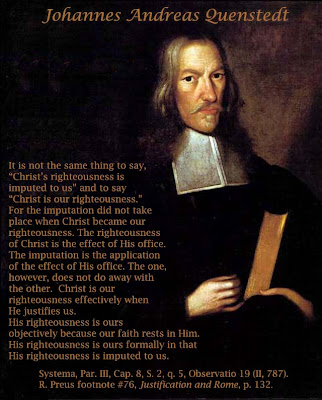 Let me again resurrect A. Hunnius against these Waltherian-Huberites for indeed these UOJ defenders believe in a Justification that already occurred apart from faith and before faith came to be… What does Hunnius say regarding this matter?

Thesis 6
Hence Paul, when he expressly discusses justification in Romans 3 and 4, does not know of a justification apart from faith, and especially as Galatians 2 plainly says, "Man is not justified except by faith in Jesus Christ."