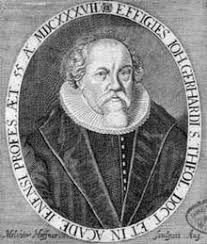 How could you pay homage and so much respect to the guy who has inferior exegetical abilities than Hunnius or Gerhardt? The guy who relied on translations rather than deal with the original Greek and Hebrew? Did the Old Orthodox Lutherans rely on translations? No, they were careful exegetes skilled in the original languages.  How could one lean on Walther rather than the ones who were there in the writing of the Formula of Concord?

Now, Walther could be correct in some area against the Lutheran Scholastics - but that would be an accident, a stroke of luck but not due to skill.

I am skeptical of Lutherans who easily dismiss Old Orthodox Lutherans. Yet today I hear Lutherans who criticise Luther, and even somewhat embarrassed of him when in fact they have not read Luther himself.

Frankly when you survey the things CFW said I would label him as unconscious Calvinist.

You might object to me and say - wait a minute LPC - CFW Walther wrote against Calvinism and criticised Calvinists. Well, you see Evangelicals criticise Calvinism too but their denial and separation of the Holy Spirit from the Word and from the Sacraments make them unconscious Calvinists.

Ever heard of false flags? You could raise the flag of Lutheranism but behind the scene you have another flag in your left arm, the real one, which undermines the one you have raised. Now far be it from me that CFW was a purposeful false flagger. Sincere people could be wrong and could have adopted a position just like the position they have been attacking.

I would like you to read this old post on the critique of Walther's method and his lack of exegetical abilities.

Fortunately it is only in the USA were Walther is revered -  for example a pastor I interact with, from German origin who migrated to Australia, is as skeptical towards Walther as I am. Another pastor gave snide remarks about the teachings of Walther. I would not be surprised to hear from an American Lutherans tell me that those people are heretics for doubting Walther.

Why is Walther considered the guru of American Lutheranism? Walther's method was to quote Luther, the Confessions and the Lutheran Fathers. In doing so, it gave his would be hearers an air of Walther being faithful to the Lutheran Orthodox tradition. When in fact he was actually mis-quoting them, and in real fact, his position contradicted them! We must remember that when Walther was a disciple of Stephan, Stephan's followers drank with loyal fervour the sayings of Stephan, when Stephan was booted out of the scene, the same unquestioning loyalty simply transferred the Walther.

This is the explanation of Dr. Karl Edwin Kuenzel...(emphasis mine).


... Walther’s method of citing Luther and the Lutheran dogmaticians...  was wrong both in principle and in practice. The problem was that unlike Luther, who stressed the Bible and the study of the Bible, Walther’s positions neither rested directly on Scripture nor did they lead one directly into it. Instead he strongly stressed, to the extreme, the importance of Luther and the Lutheran Confessions and the Lutheran fathers, and certainly much more than he cited God’s Word. Utilizing this format Walther led people to think that the matter under discussion or being presented had been established sufficiently by the quotations from Luther and the fathers; therefore it was unnecessary to study Scripture. This format actually hampered people in their use and study of the Bible. And eventually, it has come to the point where the citation theologians not only quote Luther and the old fathers but now they have also included Walther and others as proof of the doctrinal stand. As pastors, theologians, and theological students took up the study of doctrinal maters in subsequent years the subject of study was not as much a study of the Bible as it was a study of old synodical reports and conference and convention essays. And now quotations from these, not the Bible, are frequently used to support doctrinal positions.

However, it was unsettling to have Walther take a firm stance on a matter citing the Lutheran fathers as his proof, yet not realizing that at the same time his position was in contradiction to what they had written'

I think the reason why UOJers hold to Huber's view of Justification is because to them Walther believed it and has already established the issue and therefore, it is settled with no need to unearth (for them) or review the issue. Walther believed it, we should too. Duh?

I tell you what, do you want to be accepted by "confessional" American Lutherans? Pay homage to Walther and quote him too... Lord have mercy.

Ichabod the Glory Has Departed said...

This is an excellent, insightful article, Dr. Cruz. Many Lutherans in America find the adoration of CFW Walther to be disgusting. It leads to the circular reasoning of starting all theological arguments start with Walther as the ultimate authority, the Great Prophet. The ignore his training at a rationalistic university, his loyalty to Pietistic circles, and his devotion to to gurus of Pietism.

Our new book on justification will trace Walther's connection with Calvinism, which is closer than anyone can imagine at this point.
You can count on it during or before Reformation this year.

It is a great wonder when you see Waltherians drool over Walther. They do unashamedly assert that Walther was better than Johann Gerhard specially on the subject of election.

I look forward to ordering the book once it is out. It will be a timely release specially prior to 2017 500 years of Reformation.